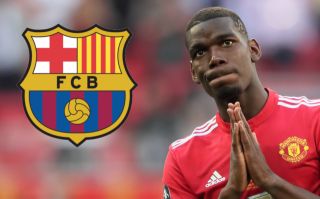 Paul Pogba has given two demands to Barcelona if the Spanish giants want to bring the midfielder to the club from Manchester United.

According to Don Balon, the Frenchman would be happy to seal a move to the Camp Nou, and that they want to make a move for the midfielder in the winter transfer window.

The report also notes that Pogba has given Barcelona two demands if they want to sign him: he wants to be one of the club’s highest earners, and he wants to be assured of a first team place.

With Barca being one of the biggest clubs in the world, they will surely have one of the highest wage bills, which means giving to Pogba’s first demands may be a big ask for the club.

Pogba’s second demand may also be a challenge, as the club already have stars like Philippe Coutinho, Ivan Rakitic, Sergio Busquets, Arthur Melo and Arturo Vidal as options in the centre of the park.

This means that promising Pogba a first team place will only leave two more midfield positions spare for the club’s other stars to fight over, something that may lead to a selection headache for Ernesto Valverde.

Pogba is one of the Premier League’s most talented players, and giving into his demands may be a smart move from the club given the potential and ability the Frenchman has at his disposal.

Only time will tell if Barca end up giving into Pogba’s demands in order to sign the French international, something that may just be worth doing given how much quality the midfielder can add to the Blaugrana’s squad.