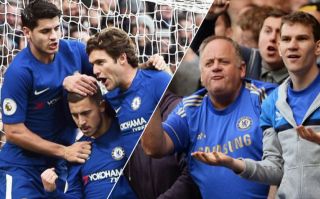 Chelsea didn’t have the best of performances against West Ham at the London Stadium this afternoon, and there was one player in particular whose performance had fans furious with him.

The Blues dropped points in the league for the first time this season, as Manuel Pellegrini’s side held the former champions to a 0-0 draw in east London.

MORE: ‘Won’t be surprised if he decides to leave’ – Some Chelsea fans question Sarri’s use of influential star vs West Ham

Chelsea now sit two points behind league leaders Liverpool having played the same amount of games, and we’re sure most fans will not be happy with the way the west London side played this afternoon.

Maurizio Sarri’s men missed a whole host of chances, as they failed to break down the Hammers’ defence.

One man in particular, Eden Hazard, didn’t have his best game in a Chelsea shirt, and this was picked up on by a whole host of the club’s fans.

The Belgian has been in fine form so far this year, however his performance this afternoon shows he still has a long way to go before being classed in the same level as Lionel Messi and Eden Hazard.

During and after the match, fans took to social media to slate Hazard for his display this afternoon, with a lot picking up on his lack of impact in the match.

Here are a few select tweets noting the winger’s below-par display today, and in all fairness, Hazard didn’t have the best game of his career!

Awful performance. Hazard totally invisible today. Willian shows up the last 5 min. Many good things until today. Terrible game from all the players. Slow passing and moving. Liverpool is gonna be tough.

By the way, as bad as that Willian shot/pass/other(?) thing was, at least he is creating. Hazard has had all week off and has looked 8 shades off awful today.

Hazard by his level has been awful today