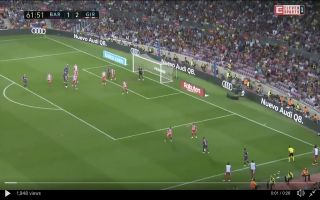 Gerard Pique won back the hearts of the Barcelona faithful by heading the defending La Liga champions level after making costly mistakes against Girona this evening.

Ten-men Barcelona equalised in the 63rd minute of the match after a quick-fire double by Girona’s Cristhian Stuani threatened the side’s unbeaten start to the new La Liga season.

Pique rose highest to head into the back of net for Barcelona after Luis Suarez’s shot was blocked by Girona’s Bono.

Former Liverpool superstar Philipe Coutinho showcased his £142m price tag in the build-up to the goal by finding Messi with a great pass over the top of the Girona defence before the Argentinian played in Suarez.

Check out Pique’s towering header below:

Still around half an hour left in this one!#BarcaGirona

Questions will certainly be asked after a poor performance by Barcelona this evening and manager Ernesto Valverde may find his position under serious threat should the Catalan giants play in a similar unflattering fashion in the near future.