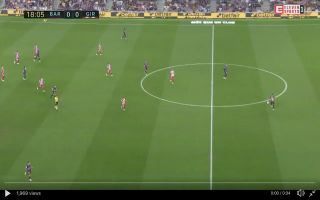 Lionel Messi had new-boy Arturo Vidal to thank for crafting a great chance for the five-time Ballon d’Or to put way against Girona on Saturday evening.

In the 19th minute of the match Chile international Vidal picked up the ball wide before using his strength and skill to beat two defenders before squaring the ball across the box for Messi to calmly strike the ball into the back of the net.

Check out Messi’s goal below:

Fans will be over the moon that Vidal has already struck a great on-field relationship with Messi. Vidal joined Barcelona this summer for a fee reported to be £27m according to The Guardian.