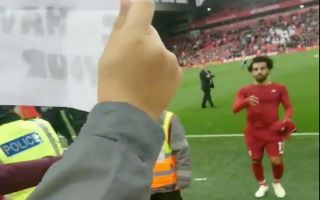 Liverpool ace Mohamed Salah played a key role in his side’s 3-0 win over Southampton on Saturday, and he showed his class off the pitch too.

The Merseyside giants extended their perfect start to the campaign at Anfield with Salah getting on the scoresheet just before half-time to seal the victory.

However, as seen in the video below, the Egyptian international also made this young lad’s day by handing him his shirt after the game.

Most players seemingly just opt to throw their shirt into the crowd after games and it’s ultimately down to luck as to who gets it.

On this occasion, Salah appears to seek out the right fan to give it to, and with the young supporter holding up a sign for him with his father calling on the Liverpool star to give him his shirt, he duly obliged with the camera then showing the youngster in tears.

Salah responded on Twitter to the video, as seen below, with the father noting that his son had “cried tears of happiness” on a day he’ll “never forget”.

It certainly is great to see moments like these between the players and fans, and it’s fair to say that Salah has very much endeared himself to the Reds faithful both on and off the pitch.