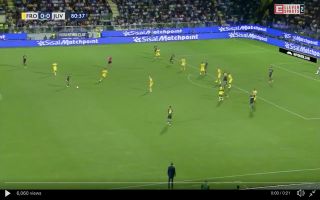 Cristiano Ronaldo was on had to become the hero for Juventus in their match against Serie A relegation candidates Frosinone this evening.

Ronaldo opened the scoring in the 81st minute of the match. Ronaldo stayed just onside to sniff out the opportunity to score Juve’s opener. Ronaldo turned into a true poacher scoring a rebound from Miralem Pjani?’s deflected shot to give Juve the lead.

Ronaldo had a significant part to play in Juventus sealing the victory in the 94th minute by launching a counter attack which was finished off by winger Federico Bernardeschi.

Ronaldo showcased his incredible work rate by latching onto a misplaced Frosinone pass following a corner to start the counter-attack for Juve.

Ronaldo used his blistering speed to drive forward with the ball before passing out wide to Pjani? who crossed the ball into the box where Bernardeschi controlled the ball and fired into the back of the net.

Look at where this phase of play begins and where it finishes. @fbernardeschi with the goal, and it's now ended @Frosinone1928 0 – @juventusfcen 2. #FroJuv #SerieA pic.twitter.com/v5GR0JHHfJ

Juventus would have struggled to come away with a victory if it wasn’t for the former Real Madrid man turning up ‘clutch’ in the dying embers of the game.

Ronaldo certainly righted his wrongs in the best way possible tonight. Ronaldo was controversially sent off in Juventus’ opening Champions League game of the season against Valencia on Wednesday evening.