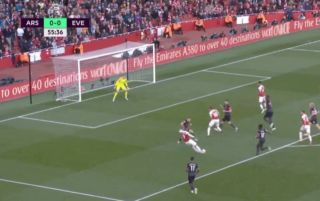 Alexandre Lacazette and Pierre-Emerick Aubameyang both scored within quick succession of each other to give Arsenal a 2-0 lead against Everton this afternoon.

The Frenchman’s goal came in the 55th minute, as he cut in on his right foot before hammering the ball into the top corner, leaving Jordan Pickford with no chance.

Aubameyang then scored the Gunners’ second just three minutes later, as a pass across goal from Mesut Ozil found Aaron Ramsey’ whose back-heel found the forward, who slammed the ball home to double the home side’s advantage.

Arsenal fans will be delighted with this, as Everton have been pressuring the north London side, and have looked the better side so far in the second half.

Here are clips of the two of Arsenal’s goals this afternoon. That finish from Lacazette!

What a finish from Lacazette. ? pic.twitter.com/kLyn4ZqBuy