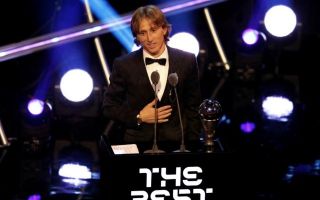 The Croatian midfielder had been the favourite to win the accolade in the lead up to the event, having won the Golden Ball award at the World Cup and UEFA’s best player award back in August, as the Sun reports.

Modric was fantastic at both club and international level during a stellar 2018-19 season, where he managed to pick up a third successive European Cup winners medal with Los Blancos and lead his country to a maiden World Cup final.

At 33-years-old the midfield maestro has once again managed to prove himself as one of the most technically brilliant players in world football and has finally managed to steal the spotlight away from former teammate Ronaldo, who now plays for Juventus in Serie A.

The Portuguese star was once again instrumental in Madrid’s run to Champions League glory and starred for Portugal in Russia as the reached the round of 16, but by his supremely high standards, he didn’t quite hit the heights he has done in previous years on an individual level.

Meanwhile, Liverpool talisman Mohamed Salah missed out on the prize after an unprecedented season with the Reds, during which he hit 44 goals in all competitions as the club finished 3rd in the Premier League and reached the Champions League final.

However, no one can argue with the final result in London this evening as Modric deservedly picked up the award and with the Ballon d’Or still to come later in the year, the diminutive playmaker may soon be adding even more silverware to his ever-growing trophy cabinet.