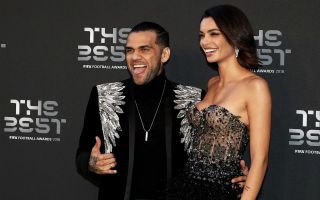 The best players in world football are in attendance at the event in London this evening as the largest company in the sport reveals who will win this year’s coveted ‘The Best’ title.

Liverpool’s Mohamed Salah, Real Madrid’s Luka Modric and Juventus striker Cristiano Ronaldo have all been shortlisted in the top three for the prize, with Barcelona superstar Lionel Messi missing out on a place among the finalists despite another stellar year with the Spanish champions.

Alves, who plays for PSG and Brazil, has arrived in the English capital with his stunning another half Joana Sanz and he has attempted to steal the spotlight away from her with an outrageous diamond encrusted blazer.

Check out the images below courtesy of several Twitter accounts including Goal, Bleacher Report and a couple poking fun at the 35-year-old:

Dani Alves always shows up to #TheBest in style ? pic.twitter.com/VcW6RMMByS

Whether he’s on the pitch or at the #Fifathebest awards, Dani Alves always looks sharp! pic.twitter.com/dK9c8k8IVB