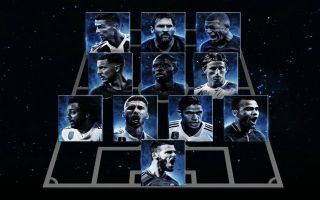 The Fifa FIFPro World XI has been revealed on Monday night, with Eden Hazard, N’Golo Kante and David De Gea all making the final cut.

The players included in the line-up were considered to be the best in their respective positions over the course of the 2017-season and there were few surprises when the final announcement was made in London this evening.

Manchester United’s talismanic keeper De Gea was given the nod between the sticks, while PSG’s Dani Alves and Real Madrid trio Raphael Varane, Sergio Ramos and Marcelo were named as the four defenders in front of him – as per The Sun.

SEE ALSO: Griezmann says he deserves to be recognised at the Balon d’Or ceremony after FIFA best player omission
(Picture) PSG star Dani Alves’ outrageous outfit turns heads at FIFA’s ‘The Best’ ceremony
“Doesn’t deserve to be there” – These fans all thinking the same thing about certain star as shortlist for FIFA’s ‘The Best’ award announced

Madrid’s Luka Modric and Chelsea stalwart N’golo Kante were the only two conventional midfielders included in the XI, while Eden Hazard was named as part of an all-star front four.

Cristiano Ronaldo, Kylian Mbappe and Lionel Messi were all included in attack to complete the final team, with Liverpool’s Mohamed Salah the only surprise omission given his fantastic year for the Reds and inclusion in the final shortlist for the FIFA best player individual award.