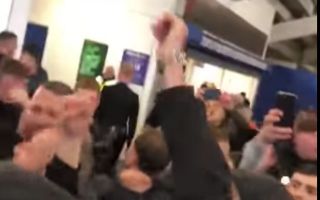 One particular Liverpool chant became synonymous with their memorable European run last season, but these Man City fans have decided to put their own spin on it.

The Reds dazzled in Europe last season as they defeated Pep Guardiola’s men en route to reaching the final in Kiev to face Real Madrid.

Unfortunately for them, it ended in defeat as they fell to a 3-1 loss to the Spanish giants, with Jurgen Klopp’s men forced to dust themselves off and go again this season.

However, these City fans aren’t going to let them forget about it it seems, as a video has emerged of them singing a new version of ‘Allez, Allez, Allez’ away at Cardiff City on Saturday, the catchy song that the Liverpool faithful sang home and away relentlessly last year.

It pokes fun at Liverpool’s defeat in Kiev as well as the fact that Raheem Sterling left the club and has since gone on to do the double with Man City last season, along with some other questionable lyrics.

Nevertheless, overall this is a decent effort from the City fans who will surely have got a chuckle out of it for themselves…