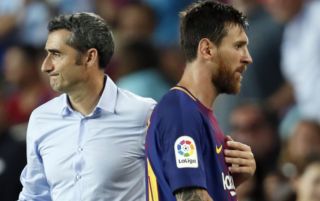 Barcelona dropped their first points of the La Liga campaign after being held to a 2-2 draw at the Nou Camp by Girona on Sunday night.

An early goal from Lionel Messi appeared to set them on their way to extending their 100% record to start the season, but after summer signing Clement Lenglet was sent off, Girona eventually earned a point with Gerard Pique rescuing his side in terms of avoiding defeat.

SEE MORE: Video: Disaster as Barcelona’s Clement Lenglet is controversially sent off for this challenge on his full La Liga debut

Nevertheless, it would have been a huge disappointment for the reigning champions, as they failed to take the opportunity to restore their lead at the top of the standings and now sit level with rivals Real Madrid on 13 points.

However, that wasn’t the only issue, as after Samuel Umtiti was sent off in the Champions League in midweek, coach Ernesto Valverde opted to make a change and leave the Frenchman on the bench in favour of Lenglet getting his first start.

It didn’t go to plan as he also received his marching orders, a decision that was heavily criticised by Barca, as per Goal.com.

According to Don Balon though, Messi was far from impressed with the decision to drop Umtiti altogether and was left furious after the game as it’s claimed he believed that it was a key factor in Barca dropping points.

Further, it’s suggested that Valverde’s decision-making in the game didn’t impress him either and he was visibly frustrated while the final result certainly wouldn’t have improved his mood. Given Lenglet was sent off in the 35th minute and Cristhian Stuani scored before half-time and prior to Umtiti’s introduction, there are question marks.

Given Umtiti’s impending suspension in Europe, it seemed to make little sense to then drop him domestically. Perhaps there is a valid point that breaking up that settled partnership with Gerard Pique was a factor, but given the quality that was on the pitch regardless coupled with the sending off decision, it seems like there was much more that ultimately influenced the result.

Based on the tweets below though, there were plenty of supporters who directed their anger at the Barcelona coach too…

Valverde: “After the red, I decided to wait some time before subbing on Umtiti. Then the goal came out of nowhere and I thought, ‘Why didn’t I put him on earlier?'”

Whose manager is this? Seriously?

please when is Valverde’s contract ending?

Valverde is a big fool?
You removed dembele?

Valverde out! I can’t stand this guy anymore!

Valverde has got a problem and unfortunately, that problem will chase him out of Barca sooner than he would’ve ever imagined. Nonsense manager!