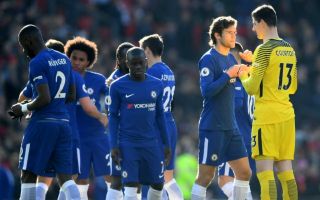 Chelsea midfielder N’Golo Kante has responded to questions over his surprise new role under manager Maurizio Sarri since he took over from Antonio Conte this season.

Previously regarded as one of the best defensive midfield players on the planet, Kante has since been moved into a more advanced role with more attacking freedom by Sarri.

Given Kante’s immense energy and superb positioning in front of the defence, this is certainly a surprise move by Sarri and a brave one, with new signing Jorginho instead used as the most deep-lying midfield player.

The France international, however, says he is enjoying learning the new role and seems generally optimistic about the new look of the side under the new Blues boss this season.

‘I am enjoying the role [under Sarri]. It is a new challenge for me,’ he is quoted in the Metro.

‘I try to understand the move and the right players’ combinations.

‘I think we are doing well. We need to keep working and keep improving and I think we can enjoy a good season together.’

Chelsea have made a flying start to the season, though their winning run came to an end with a slightly disappointing 0-0 draw against West Ham at the weekend.

One imagines, however, that Kante has the qualities to adapt to his new position and still make a big contribution to Chelsea’s season.