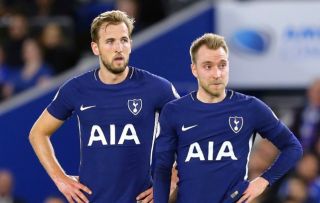 Tottenham star Harry Kane is reportedly increasingly keen on a transfer away to a big club like Barcelona as he wants to fulfil his ambition of winning major titles.

Spurs have not made the most convincing start to the new season and it would not be at all surprising if that hurt them in their hopes of keeping big players like Kane at the club.

The England international has shown himself to be one of the most lethal finishers on the planet in recent times and could no doubt be a great fit at an elite European club.

According to Don Balon, Barcelona are interested in Kane as a replacement for the ageing and off-form Luis Suarez, and it seems clear the 25-year-old could do a great job in that department.

Harry Kane in action for Tottenham this season

This is a big blow for Tottenham, however, whose remarkable progress under manager Mauricio Pochettino seems to have stalled of late with a quiet transfer window and an indifferent start to this campaign.

Losing Kane would be devastating for the north Londoners, with the club previously also suffering in a big way when big names like Gareth Bale and Luka Modric have been poached by bigger clubs.

However, they seem set to pay the price for failing to take that step further and capitalise on this strong period by bringing home an actual piece of silverware.