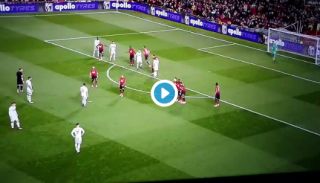 Some Liverpool fans are calling young loanee Harry Wilson a club legend already as he scores a screamer against Manchester United.

The Reds ace has not seen much first-team action at Anfield so far, but has shown what he can do here with this superb free-kick in the League Cup against United at Old Trafford.

MORE: Video: Phil Jones falling over is the best thing about the Manchester United vs Derby game

This wondergoal made it 1-1 on the night and sets up an exciting finish for this game.

But even taking away from that it’s a glorious effort in its own right, with many Liverpool fans understandably excited by what they’ve seen…

Harry Wilson just scored this goal for Derby County vs Man United. This is filthy. OH MY GOD. ???? pic.twitter.com/lMOkJqmHQl

25.9.18 official Liverpool legend if Derby knock them out!

Harry Wilson Liverpool legend after that!!! What a hit YNWA

How has origi kept his place in Liverpool squad for season but Wilson sent out on loan, madness