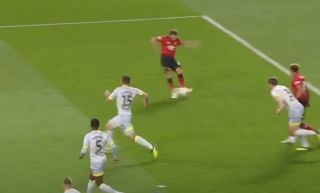 Watch a video of the superb Juan Mata goal against Derby County below as the Spanish playmaker lifts the mood for Manchester United.

Despite a recent improvement in form, the Red Devils were held at home to Wolves at the weekend, and preparation for tonight’s game has been marred of a report of a bust-up between manager Jose Mourinho and star player Paul Pogba, as per BBC Sport and others.

Still, Mata finished off a lovely flowing move here, which was set up thanks to great play by the likes of Ashley Young and Anthony Martial in the build-up.

Mata then finished with the kind of class and composure we’ve come to expect from him, reminding fans that there’s more to this team than just Pogba…