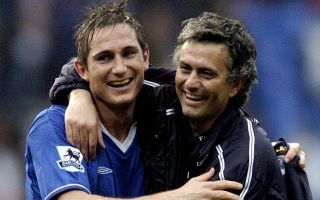 Derby County boss Frank Lampard has admitted that Jose Mourinho could be sacked at Old Trafford, given the nature of managerial roles in the modern era.

The former Chelsea midfielder is preparing his Rams side to take on United at Old Trafford in the Carabao Cup on Tuesday night, where he will come face to face with his former manager on the touchline.

Lampard played under Mourinho twice during his time at Stamford Bridge, most notably winning back-to-back Premier League titles under his stewardship between 2004 and 2006.

The Portuguese boss isn’t enjoying the same levels of success in his current position at Man United, having watched his team pick up just 10 points from 18 in the opening two months of the season.

A 1-1 draw at Old Trafford on Saturday against newly promoted Wolves only served to increase the pressure on Mourinho, with supporters growing tired of his preferred style of play and tendency to criticise his players in the media.

According to the Independent, ahead of tonight’s League Cup clash, Lampard gave his verdict on the precarious position the 55-year-old coach finds himself in, as he told reporters: “We’re all sackable at any moment, I am, he is, every manager is.

“The fact is, any manager who goes beyond three years now is probably the exception to the rule.

“I don’t think it’s anywhere near specific for Jose – that’s the nature of how the game has gone.

“Jose Mourinho does have a style, of course he does, but it will be a style to get the best out of players to win a game.

“I don’t know how he approaches things at Manchester United.

“I don’t know if his qualities are timeless, but we all adapt and change to circumstances.”

The Red Devils will be expected to advance to the next round with a comfortable win against Derby, before travelling to the Olympic Stadium on Saturday to face West Ham United.

Mourinho and his players cannot afford any more slip-ups having already fallen 8 points behind Liverpool in the title race and the importance of cup competitions could be huge for the club this year given their inconsistency in the league.