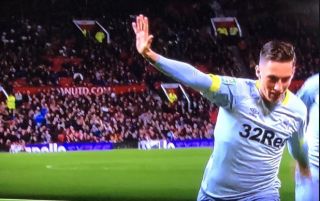 In case you missed it, Harry Wilson scored an absolute screamer for Derby County to level it up in the Carabao Cup tie against Manchester United this evening.

You could also be forgiven for not knowing the Welshman is on loan at Derby from none other than United’s old rivals Liverpool. so Reds fans seem pretty pleased about how this game’s going.

In fact, a few also pointed out on Twitter that Wilson seemed to troll United with his goal celebration as he held up five fingers at the crowd.

This would appear to be a reference to Liverpool’s five European Cup wins – the most of any English club, as their fans like to remind us on a regular basis.

Here’s what some fans are tweeting about Wilson’s celebration…is there anything to it or is it just an innocent wave?

HARRY wilson you little beauty. @webbylfc3 just pointed out he give it the ? five times to. Intentional ?? pic.twitter.com/z9zRetazT3

Just the five fingers from Liverpool loanee Harry Wilson as he scores at Old Trafford pic.twitter.com/2JZ1XS6EvU

Harry Wilson doing the five times celebration as he piles one in at Old Trafford there. Welcome round mine any time @harrywilson_.

Whatever you do next, those FIVE fingers will never be forgotten… @harrywilson_ #LFC https://t.co/UJUU1oCqai

Does Harry Wilson gave a 'we won it five times' sign there?

Wilson with the 'five' hand there!! Good lad.

Wilson’s only done the five salute….

Five times there from Harry Wilson