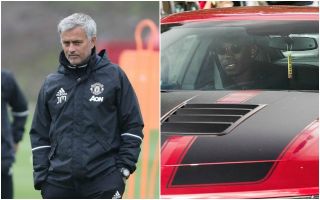 Paul Pogba is reportedly set to be sold by Manchester United in the upcoming January transfer window after a big decision made by Jose Mourinho.

Reports are emerging this evening of a major bust-up between the pair that looks to have thrown the France international’s future at Old Trafford into major doubt.

First, a report from the Times claimed Mourinho told his players today that Pogba would never captain the club again after taking the armband for much of the start of this season.

This piece detailed how the Portuguese was unhappy with Pogba’s attitude, also citing his comments to the press after the Red Devils’ 1-1 draw with Wolves at the weekend.

It’s not gone well between these two at Manchester United

There has now been a big follow-up, with the Sun reporting that Pogba is now set to be sold, with Mourinho holding today’s meeting without Pogba present.

This looks very bad news indeed for fans hoping to keep Pogba over Mourinho, with some debate for some time over who might last longer at the club.

It seems it could well be the 25-year-old set for the exit door, with the Times also noting interest from the player’s old club Juventus, as well as from Barcelona.