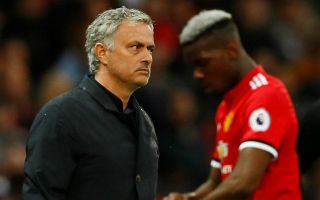 Manchester United manager Jose Mourinho has denied reports of a fallout with Paul Pogba despite confirming he dropped the Frenchman as captain.

The biggest football news in England Tuesday night came from Old Trafford for two reasons, starting with the 25-year-old midfielder’s rumoured bust-up with Mourinho, which saw him lose his vice-captaincy privileges – as per BBC Sport.

The second story surround’s United’s latest setback on the pitch, as Derby County won on penalties in tonight’s Carabao Cup clash against the Premier League giants to condemn Mourinho’s men to a disappointing third-round exit.

The Red Devils poor start to the 2018-19 campaign rumbles on and it now seems an absolute certainty that all is not well behind the scenes given the fresh news coming out of the club which is clearly affecting the player’s mindsets.

According to Chris Winterburn, who works as a writer for Spanish publication Marca, Mourinho addressed the media after the defeat this evening to have his say on the reported issue with Pogba, as his latest Twitter post states.

Mourinho on Pogba, “No, the only truth is that I made a decision that Paul is not the second captain anymore. No fallout, just a decision that I can make, I’m the manager and I’ve made the decision.”

“No, the only truth is that I made a decision that Paul is not the second captain anymore,” the Portuguese tactician told reporters. “No fallout, just a decision that I can make, I’m the manager and I’ve made the decision.”

Mourinho’s latest comments will do nothing to quell rumours of discontent in the dressing room and the club is now facing a potential crisis if results don’t start picking up extremely quickly.

United are already 8 points behind Liverpool in the Premier League and have been knocked out in the first stage of the League Cup, which might have been the team’s best opportunity for silverware this season.

All is not well at Old Trafford at the moment and we can expect the fallout after this latest result to continue late into the week, as Mourinho tries to galvanise his squad for a trip to the London Stadium to face West Ham on Saturday.