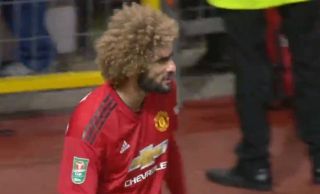 Manchester United midfielder Marouane Fellaini scored late on to make it 2-2 against Derby County in the League Cup.

The game will now go to penalties after this fine header from Fellaini rescued the game against the Championship side, who’d taken a surprise lead at Old Trafford late on.

MORE: Video: Phil Jones falling over is the best thing about the Manchester United vs Derby game

There were six minutes added on, however, allowing the Belgian to tower above the Derby defence to put the cross away.

Here’s a video clip of the late, late goal, but will it be enough for United as they now look to scrape through in the shoot-out?