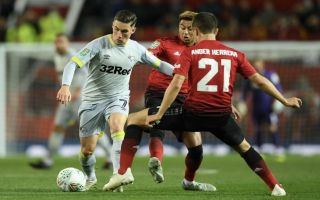 Wilson’s strike drew Derby level at 1-1 after 60 minutes at Old Trafford in the Carabao Cup and sent the away fans into raptures, much to the delight of Rams boss Frank Lampard.

The 21-year-old is currently on loan at Pride Park from Premier League giants Liverpool and has certainly sent out a strong message of intent to club officials with his latest contribution for the Championship outfit.

The Welsh winger stepped up about 25-yards from goal and smashed home an unstoppable set piece which left Sergio Romero completely flat-footed in the United net.

Derby went on to win the match in the shock result of the night after a penalty shoot-out, which saw them advance to the fourth round of the competition.

The technique Wilson employed to hit the ball was reminiscent of Cristiano Ronaldo’s infamous method, who was once a cult-hero at Old Trafford and Reds teammate Brewster could not contain his joy after seeing the strike.

The 18-year-old forward is a part of the youth set up at Liverpool with Wilson and he posted on social media to acknowledge his ‘bro’s’ latest achievement.