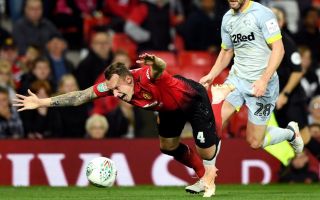 The England international has something of a reputation for unorthodox defending and for making some truly amazing faces as he crashes about all over the place.

This is one of his best yet as he went crashing to the ground like a drunken Superman after a challenge in the Derby game at Old Trafford.

What is Phil Jones.. pic.twitter.com/aQ5qJIfICI

In every game he plays, there's an image of Phil Jones training for a game of fucking Twister! pic.twitter.com/RpFLG8KBBU