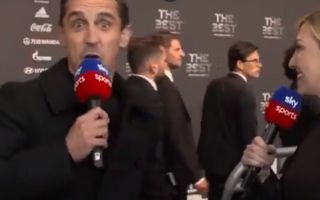 Liverpool star Mohamed Salah walked away quickly from Manchester United legend and pundit Gary Neville when he tried to get an interview with him.

The Egypt international won the Puskas award last night and is generally one of the main names on everyone’s lips in the Premier League these days after winning PFA Player of the Year and the Golden Boot last season.

Salah, however, was not particularly interested in stopping to chat to Neville, it would seem.

See the video below as the Reds star stops for a quick handshake with the former United defender before making a quick escape – almost as speedy as he is on the pitch!