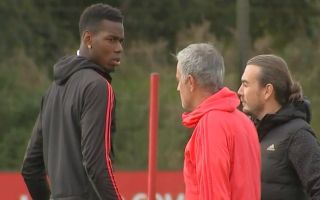 It has been sensationally revealed that Paul Pogba and Jose Mourinho never saw eye to eye with each other from the get-go.

The pair’s strained relationship is understood to have begun from the very moment that Pogba returned to United from Juventus in 2016.

United boss Mourinho is understood to have been angered by the manner in which Pogba’s return to United was announced on social media according to the Mail Online.

Pogba returned to United for a world record fee of £89m according to BBC Sport. Despite the world-record fee it was the manner in which Pogba’s transfer was announced that set the world alight.

Pogba’s announcement campaign was focused around a the hashtag ‘Pogback’ campaign, this was accompanied by a announcement video featuring UK Grime superstar Stormzy and Pogba thanks to kit sponsors Adidas.

Pogba’s announcement video quickly went viral worldwide and is undoubtedly one of the reasons why extravagant videos have been used to announce transfers ever since.

Check out the announcement video below:

Mourinho believed that the facade surrounding Pogba’s arrival put the player above the club, the media interest and public campaigns around the Frenchman’s return were a step above anything ever seen before.

A source at United told the Mail:

“Jose is all about the team and he was seriously annoyed by the whole announcement.

“He feels that no player should be bigger than the club and what appeared to be a branding exercise – making it about Paul Pogba and not United – did not impress him.”

The source made the point that both Pogba and Mourinho have worked at repairing their stranded relationship although both men’s efforts to get the relationship back on track have failed.

“Attempts have been made on both sides.”

“But there have been a number of occasions where Jose has been annoyed by what he’s seen from Paul.”

“It got off to a bad start and it does not appear to be getting better.”

See More: “Everything was s**t” – Manchester United staff shocked by Jose Mourinho’s attitude from day one

The growing rift between Pogba and Mourinho needs to be handled sooner rather than later, there is a now growing concern that the row could impact the entire United squad.

Cohesion between the United squad is important now more than ever following a run of poor displays capped off by Derby County shocking the world to knock out United in the league cup yesterday evening.