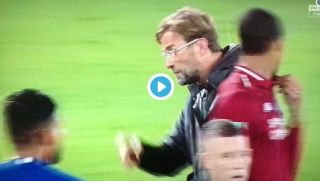 Liverpool manager Jurgen Klopp has revealed why he approached Xherdan Shaqiri and gave him something of a dressing-down on the pitch after the Chelsea game.

According to Goal’s Neil Jones, Klopp told his press conference he was telling Shaqiri that he could’ve played Mohamed Salah in from a chance from a free-kick towards the end of the game.

LFC lost 2-1 at home to Chelsea, ending their 100% start to the season, so emotions were clearly running high.

Klopp says Shaqiri exchange at the end was because he wanted him to play Salah in wide from the free-kick in the last second. #LFC

Daniel Sturridge had given the Reds the lead before goals from Emerson Palmieri and a solo stunner from Eden Hazard turned the game on its head.

Here’s the incident between Klopp and Shaqiri at full time…