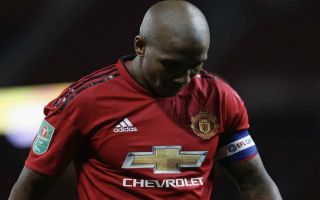 The Rams booked their place in the fourth round of the competition after a hard-fought win against the Red Devils on penalties after a gruelling 90-minute battle.

United took the lead just three minutes into the match thanks to a Juan Mata goal, but Harry Wilson equalised for the home side on the hour mark, smashing home an unstoppable free-kick from 25-yards-out.

Frank Lampard’s Championship outfit then silenced Old Trafford completely with just five minutes of normal time left to play, when Jack Marriott headed the away side into the lead.

Marouane Fellaini scored in the dying seconds of injury time to take the game to penalties, but Derby had the final say when Phil Jones missed his spot-kick to hand them an 8-7 victory in the shootout.

Young served as vice-captain in the absence of Antonio Valencia and according to Sky Sports, he has shockingly stated that Jose Mourinho’s men were beaten by a side who wanted it more, as he told reporters: “There’s disappointment in (the dressing room), as you can tell.

“I’m not too sure whether we did enough in 90 minutes to win the game, but we managed to dig deep, show character and take it to penalties. But it just wasn’t enough to win the game.

“I think we said that when you play against teams from lower divisions it’s going to be tough.

“I think they had more intensity than we did. When you’re playing these games, you have to show that intensity and go further than the opposition.

“We didn’t do that and I think we got punished and they won the game.”

United must now dust themselves down quickly ahead of an away trip to the London Stadium on Saturday to face West Ham, which is a must-win game if the team is to keep in touch with their rivals at the top of the Premier League table.

However, if Young and company cannot raise their game and overall intensity for the contest, there is every chance that the Red Devils will be facing an even bigger crisis at the end of play this weekend, as the pressure continues to build on Mourinho at the start of the season.