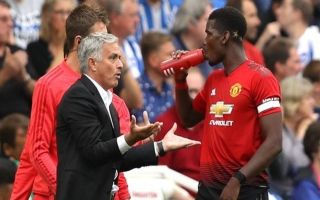 The sensational Jose Mourinho and Paul Pogba training ground row was staged by the United boss according to a French football expert.

According to a report published by the Express French football expert Julien Laurens has made the sensational claim that Jose Mourinho staged the training ground incident with Pogba.

This morning Sky Sports cameras were at Manchester United’s Carrington training complex filming a open training session when the incident between the pair occurred.

25-year-old Pogba shook the hand of Michael Carrick and also greeted another member of United’s coaching staff but seemed to ignore Mourinho, Mourinho clearly felt disrespected by this and made a comment towards Pogba which sparked the argument between the pair.

Wow! Look at this exchange between Pogba and Mourinho in training this morning ?? pic.twitter.com/mlcxvaL9yn

Here is another look at the frosty exchange between the pair:

A look back at their relationship: https://t.co/F0wvfdwoTxpic.twitter.com/7YfegyToCi

Despite the argument Pogba went on to complete the training session as normal and seemed all smiles alongside his United teammates.

Laurens gave his take on the incident, claiming Mourinho staged the incident in front of the cameras.

“Sky picked this footage up, they have the right to film 3 or 4 training sessions a season per club I think,”

“This morning he (Jose Mourinho) knew that the cameras were at training from the Premier League and Sky.

“Mourinho knew that the cameras were coming this morning, he knew very well that Pogba was going to come and shake the hands of Michael Carrick, the other assistant, and then he would arrive in front of Mourinho.

“Mourinho knew all of this, that the cameras would be on him, and he chose that moment to say something to Pogba that quite clearly didn’t please him.”

It comes as no surprise to me that Mourinho may have staged the incident given that both men have taken jibes at each other in the presence of the media before.

With the Mourinho and Pogba situation not looking as though it will come to a halt anytime soon the Manchester United hierarchy will be facing immense pressure to find a permanent solution to the problem.

Mourinho is already facing scrutiny for United’s poor start to the season and the ongoing facade with star-man Pogba is not going to hold Mourinho in good stead should his position as manager be questioned.