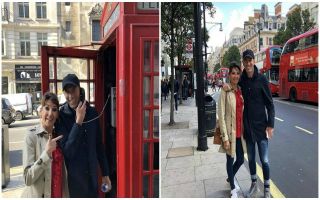 Former Real Madrid manager Zinedine Zidane has been spotted in the English capital as speculation linking him to the Man United job continues.

The Frenchman has been out of work since leaving the Santiago Bernabeu this summer, just days after guiding the club to its third successive Champions League title.

According to the Telegraph, the 46-year-old coach is the front-runner to succeed Jose Mourinho in the hot seat at Old Trafford, with the Red Devils currently languishing in mid-table after an indifferent start to the season.

The Portuguese boss has come under intense pressure in recent weeks for the team’s poor displays on the pitch and it appears that he may be on borrowed time in his current role at the Theatre Of Dreams.

Zidane has been spotted in London on Wednesday afternoon with his wife taking in the sights around London, which might add fuel to the fire surrounding the rumours of his proposed move to United.