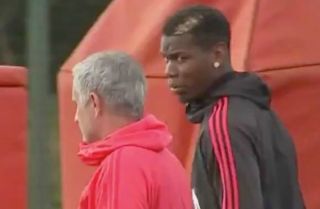 Sky Sports have just released new footage with improved sound to show that seemed to be at the heart of Jose Mourinho’s row with Paul Pogba today.

The Portuguese tactician was seen saying something that provoked a big reaction from Pogba, with the video doing the rounds this morning.

It now seems to be that Mourinho was keen to quiz Pogba about his posts on Instagram last night, with the France international among the players watching the defeat to Derby County from the stands.

If you turn your sound up, you can hear Mourinho asking United’s press officer John Allen: “When did Paul post that Instagram?”

Mourinho may well be concerned about Pogba filming himself laughing and joking while his team in front of him loses an important match.

The Red Devils fielded a much-changed side at Old Trafford and drew 2-2 against Derby before crashing out on penalties.