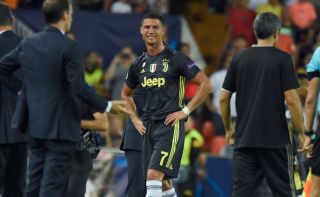 Juventus forward Cristiano Ronaldo will be available to face former club Man Utd after it was confirmed he has been given a one-match ban in the Champions League.

The 33-year-old received a straight red card against Valencia earlier this month in an altercation involving Jeison Murillo.

Given the nature of the dismissal, there had been concerns that he could miss more than just the one match, but as noted in the tweets below from Sky Sport Italia and BT Sport, the Portuguese superstar will miss the Young Boys encounter and return to Old Trafford to face Man Utd on October 23.

That will be a huge relief for the player himself in terms of not missing out on that opportunity to return to Manchester, while Juve coach Massimiliano Allegri and his squad will be delighted to have their teammate available with them, depending on fitness and form at the time.

The former Real Madrid star has undoubtedly been signed to help the Turin giants take the next step in Europe, given his pedigree and history in the competition, as their wait for success now stretches beyond two decades.

In turn, while he had a nightmare Champions League debut for the club at Valencia, he’ll be hoping to put it right for the remainder of the group stage to ensure that Juve make it safely through to the knockout rounds.

? BREAKING: Cristiano Ronaldo WILL be available to return to Old Trafford next month!