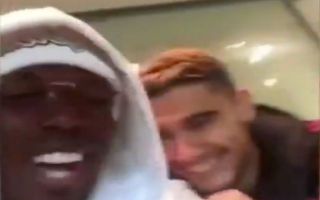 After an improved clip was posted of the tense clash between Jose Mourinho and Paul Pogba at Man Utd training on Wednesday, the reason behind it was seemingly revealed.

The Frenchman was in the stands as United eventually crashed out of the League Cup to Derby County on Tuesday night, and as seen in the first video below, Mourinho seemingly took exception to Pogba’s social media activity.

That in turn led to a tense clash between the pair ahead of training, and as per The Telegraph, it has led to further question marks being raised over how long the 25-year-old will remain at Old Trafford.

The Instagram post at the heart of the problem can be seen below, as it shows Pogba with Andreas Pereira and Luke Shaw watching the game against Derby, with the trio appearing to enjoy a little laugh at some stage of the game.

Whether Mourinho thought Pogba was enjoying himself as his teammates struggled to get a positive result on the pitch to advance in the cup or simply just wasn’t impressed with his use of social media during the game at all is unclear.

Nevertheless, that is seemingly what created the issue between the pair, and it now remains to be seen whether or not the situation can be sorted out in the best interests of the club for the rest of the season at least.

United were held to a draw by Wolves at Old Trafford last weekend, with a Pogba mistake leading to their equaliser. Coupled with the disappointment against Derby and now fresh tension between the midfield ace and Mourinho, it remains to be seen if he features against West Ham United this weekend.

This whole Jose vs Pogba thing is because of this video. Jose things he posted the video after the game.

Pogba: “Why would i post it after? Why would i laugh when we lose” pic.twitter.com/IPusrwCdJc