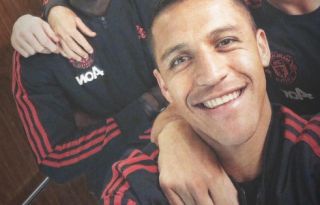 Manchester United star Alexis Sanchez has seemingly attempted to respond to all the talk of a dressing room split at Old Trafford.

Paul Pogba and Jose Mourinho have dominated the headlines for all the wrong reasons this week after Sky footage showed them appearing to clash in training.

Since then there has been all sorts of talks of cliques at United, with the Daily Mirror reporting of ‘civil war’ at the club and different players siding with Mourinho and some with Pogba.

It seems telling that Sanchez has chosen to upload a photo of himself along with David de Gea, Eric Bailly, Juan Mata and Ander Herrera at some attempt to show unity and togetherness.