Apologies, Liverpool, we’re telling you this a little late, but it might be worth keeping an eye on that guy Eden Hazard.

The Chelsea star notably waltzed his way through the Reds defence at Anfield on Wednesday evening and is in the form of his life right now, so it’s vital they keep a closer eye on him this time.

Another man in blue to keep an eye on if he starts is Olivier Giroud, who has a strong scoring record against Liverpool.

Jurgen Klopp’s side are of course full of threatening players too, and Mohamed Salah certainly has a habit of scoring against Chelsea, so couldn’t really wish for a better opponent against whom to try to get his season going.

Worth watching Virgil van Dijk if he plays as well, as it’s not at this time 100% certain he’ll be fit enough to make it back. Even if he does get onto the Stamford Bridge pitch, the Dutchman might be a player to target if he’s been rushed back.

Of course, since then both sides met in the Carabao Cup and Maurizio Sarri’s men triumphed, but that might not necessarily have too much sway on how this league fixture goes, with both managers likely to field quite different personnel.

Here’s a snapshot of the last five meetings between these two:

Not a great record for Liverpool in this fixture in recent times, and going back further the Merseyside giants have won just two of the last fifteen meetings between them in all competitions. There have been a lot of draws across that period (seven), while Chelsea have won six of those.

However, those two Liverpool victories have both come at Stamford Bridge, and both were under Jurgen Klopp… 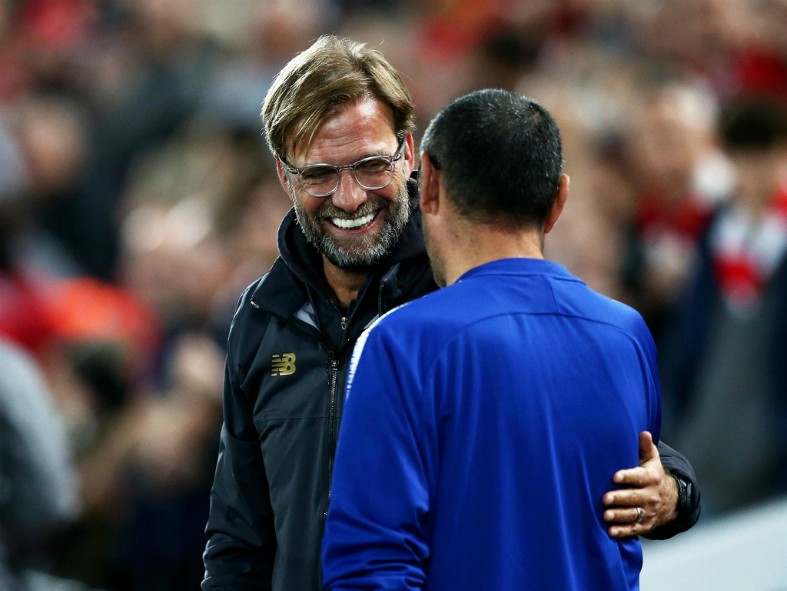 Two managers committed to a similar style of football, so there should be plenty of respect between the two opposing managers this weekend.

‘It is the biggest change I ever saw in such a short period of time, of system. Wow. Style completely (different). What a manager he is, to be honest,’ Klopp said of Sarri in his press conference, as quoted by football365.

‘I’m pretty much a supporter of him since I saw them playing at Naples (Sarri’s Napoli team). Outstanding football, and now doing it in a very interrupted pre-season, without a lot of players involved, starting the season, and you see immediately the impact – all my respect. It’s really good to watch. Good job so far.’

The feeling is mutual, with Sarri quoted by the Evening Standard as saying: ‘(Klopp) is one of the best, of course. One of the best coaches in the world at the moment. They have worked very well in the last season with these players.

‘So, as I said, now I think they are ready to win. To win maybe the Premier League, maybe the Champions League. But ready to win something important.’

Sarri only took over at Chelsea this summer but his style of football, and of course the improved results that have come with them, have proven hugely popular.

One would imagine both are feeling fairly safe in their jobs right now as they look set to scrap it out for the title, though with neither necessarily under big pressure to topple Manchester City this season.

This is an extremely tough one to call, but we’re going to stick our necks out and go for a Liverpool win by the odd goal.

Chelsea got a huge slice of luck with an offside on their opening goal at Anfield in midweek, and will be up against a stronger LFC side this weekend.

On top of that, the Blues now have some injury concerns of their own so may have to shuffle the pack a little more than they’d like on Saturday.

Hazard is, of course, on fire at the moment, and is sure to have an impact in this one, but those around him, be they Alvaro Morata, Giroud or Willian, are not quite as fearsome a force as Salah, Mane and Roberto Firmino when they’re on form.

2-1 to Liverpool for seven wins out of seven this season.