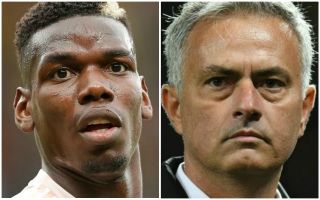 Man Utd boss Jose Mourinho spoke about Paul Pogba in his press conference on Friday, and it was a mixed bag from the Portuguese tactician.

The pair have been a hot topic for discussion this week following an incident at training on Wednesday, as seen in the video below.

That naturally sparked talk of tension between the pair, while Mourinho also confirmed that the 25-year-old would no longer be given the captain’s armband.

With that in mind, it didn’t paint a particularly positive picture of their relationship, but whether it was to deflect attention away from it or a genuine assessment of how he sees the situation, Mourinho was adamant that there was no problem between the pair.

Nevertheless, he did seemingly warn Pogba that ‘no player is bigger than the club’, and so if he didn’t impress in training, he would not be in the starting line-up. Fortunately, it sounds as though he has remained professional this week and trained well, which in turn led to Mourinho confirming that he will play against West Ham this weekend.

“The relationship between player and manager is good. Nobody trained better than Paul on Tuesday, Wednesday, Thursday and Friday,” he is quoted as saying by Sky Sports.

Time will tell if Pogba can consistently deliver for United in the coming weeks to put an end to all the talk surrounding him and Mourinho as well as his future at Old Trafford.

That is ultimately the best way to silence the rumours and critics, especially with United now taking two steps back over the past week following their draw with Wolves and crashing out of the League Cup in midweek.

Mourinho has said his part, now it’s likely down to his player to show that he deserves to be in the starting XI and is capable of putting all the talk around him to the back of his mind when he steps on the pitch.

The extended version of the Mourinho and Pogba incident at Carrington today. Listen between 0.25-0.29… Jose can be heard saying “Paul, get out”. #mufc [@MUnitedFrance] pic.twitter.com/MtCR1FKvqt