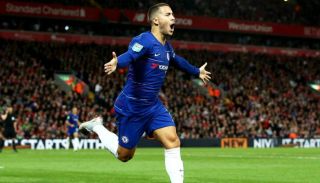 Chelsea ace Eden Hazard has started the season in fine form, but boss Maurizio Sarri believes he’s not even close to his full potential just yet.

The 27-year-old has bagged six goals and provided two assists in just seven games so far this year, showcasing his quality with a stunning goal against Liverpool in the League Cup win at Anfield in midweek.

Seemingly reaching his best form under Sarri, it remains to be seen if the Belgian international can lead the Blues to major honours this season if he keeps this form up, but ultimately, the Italian tactician doesn’t even feel as though we’ve seen the best of Hazard yet.

Further, he’s even revealed how he believes Hazard can improve, and it involves doing more in training to reach elite level and finally put himself at the same standard of the very top players in the game.

“I think that he’s for sure one of the best but I’m absolutely convinced that he can improve. If he can improve during training maybe he will be able to use and serve at 100 per cent,” he told the media, as reported by Sky Sports. “Because I think that we have seen only 70-80 per cent of his potential, so if he can improve he can be the best in the world.

“It’s difficult to compare him with other players. He’s a genius, I think he’ s unique.”

That’s high praise indeed from his coach, and Hazard will undoubtedly want to continue to repay that trust from him with goals and match-winning performances.

Next up is Liverpool at Stamford Bridge in an early top-of-the-table clash between the two sides, and so it remains to be seen if Hazard does put in the extra shifts in training and continues to shine on the pitch to prove that Sarri’s assessment of his quality is accurate.

At 27, he’s surely on the cusp of his peak years to play the best football of his career.