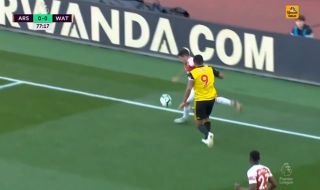 These Arsenal fans on Reddit are in a state of disbelief at what many clearly feel is extremely biased commentary from Tony Gale.

Below is a video clip of an incident from Arsenal’s game against Watford today, with Troy Deeney charging into Lucas Torreira rather aggressively.

Over the top of the footage, however, Gale can be heard criticising Torreira for kicking through Deeney.

Admittedly, this is a pretty ridiculous claim from the co-commentator as he essentially blames the Gunners midfielder for continuing his follow-through after making a clearance that was charged down rather pointlessly by Deeney.

Watch the clip below and decide for yourselves…

Here’s a selection of comments from Arsenal fans on Reddit…

‘I honestly thought he was joking when he said this, most ignorant piece of commentary I have ever heard’

‘It’s ridiculous how biased he was.’

‘Can we get Tony Gale fired, Reddit? Do we have the power?’

‘So as soon as he finishes clearing the ball he is supposed to move his leg out of the way and not have any follow through?’