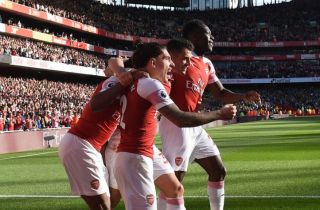 The Gunners won a closely-fought encounter 2-0 in today’s Premier League game, with the club’s two goals both coming in the final ten minutes of the match.

It wasn’t an easy afternoon for Arsenal by any stretch of the imagination, but they held their nerve and did what was needed late on to take the three points in a way that must have been pretty satisfying for new manager Unai Emery.

The Spanish tactician had the tough job of replacing the long-serving Arsene Wenger this summer, but appears to have instilled a winning mentality in this squad, or should that be ‘cojones’?

Some of you may remember Deeney saying Arsenal lacked precisely that after their game at Vicarage Road last season.

It seems Bellerin remembered it as he tweeted this intriguing caption for his photo of the game today:

Okay, it’s two cherries, but what else could he be referencing, especially when they look like that?

It’s worth noting as well that the Spaniard exchanged blows with Deeney on social media after another game between the two sides last season:

Today’s game didn’t pass without incident involving Deeney either, as some Arsenal fans on Reddit were furious about his challenge on Lucas Torreira, as well as the ‘biased’ commentary over it from Tony Gale…