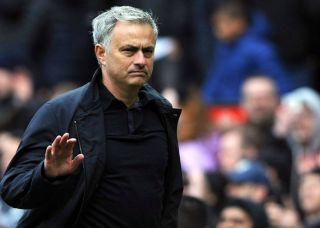 Man Utd take on West Ham United at the London Stadium on Saturday, with Jose Mourinho desperate for a morale-boosting win for his side.

After being held to a draw by Wolves last time out in the Premier League, the Red Devils crashed out of the League Cup in midweek after defeat to Derby County on penalties.

Coupled with the well-documented clash between Mourinho and Paul Pogba in training on Wednesday, they have certainly been in the headlines for the wrong reasons for the past seven days or so.

Nevertheless, despite those issues in midweek, Pogba takes his place in the starting XI at West Ham, and he’ll surely now have to be fully focused on producing a top performance to prove his commitment to United, Mourinho and to silence the critics.

Aside from that, it’s a strong line-up from the Portuguese tactician as expected, with Anthony Martial given the nod up top with Romelu Lukaku while Scott McTominay comes into the midfield. There is no place for Alexis Sanchez in the squad though.

Ashley Young takes the captain’s armband and will start at right-back, and along with the likes of Nemanja Matic and Marouane Fellaini in midfield, Mourinho has gone for experience and solidity across the board to ensure that his side come away with a positive result.

All eyes will likely be on Pogba though as after all the talk this week about his relationship with Mourinho, an influential performance in a win would certainly go a long to prove that he isn’t going to let that effect his efforts on the pitch when selected.

Based on the tweets below though, the majority of supporters reacting on Twitter were delighted to see Martial in the starting line-up. Having impressed in his recent outings, it appears as though Mourinho is ready to reward him for that improved form with another chance to shine…

How we’ll line up for #WHUMUN… #MUFC