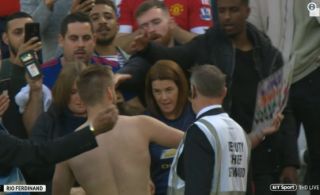 Manchester United left-back Luke Shaw showed a touch of class by acknowledging the travelling support after the team’s defeat at West Ham today.

The England international is one of few United performers to emerge with any real credit this season, but he showed he’s a great character as well as a top performer.

Despite another bad day at the office for the Red Devils at the London Stadium as they lost 3-1, Shaw went over to give his shirt away to a fan.

Luke Shaw gives his shirt to a fan at the end of the game. Touch of class. #mufc [BT] pic.twitter.com/Z1gQKe3J28