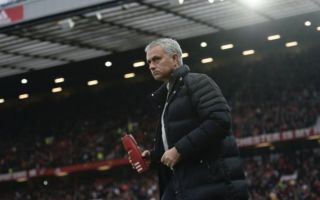 Manchester United manager Jose Mourinho was reportedly nowhere to be seen as the players arrived back in Manchester following the defeat to West Ham.

The Portuguese is thought to have stayed in London, where he still has a family home from his time in charge of former club Chelsea, according to the Daily Mail.

The report talks up speculation over Mourinho’s future at United, with the piece claiming players and staff openly discussed his possible sacking within the next week on the way back home from London.

There may not be a huge amount to read into Mourinho not going back to Manchester with his squad, but it does little to ease the minds of fans who must feel this squad looks quite divided right now.

The 55-year-old is known not to have fully settled in Manchester, with the MEN reporting earlier this year that he still lives in a hotel in the city.

This is despite being in the job with the Red Devils since 2016, though it may prove a wise choice as speculation hots up he won’t be there for much longer.

A video emerged today from beIN Sports, with presenter Richard Keys claiming the broadcaster understood United had made initial contact with Zinedine Zidane about the job.

The Frenchman is out of work since leaving Real Madrid in the summer, and after great success at the Bernabeu would no doubt be a popular choice to replace Mourinho.