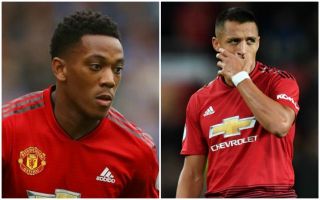 Manchester United manager Jose Mourinho has given an absolutely baffling explanation for dropping Alexis Sanchez for Anthony Martial this afternoon.

The Red Devils lost 3-1 away to West Ham earlier today to continue their miserable recent form, which saw them draw 1-1 at home to Wolves last weekend before then being surprisingly dumped out of the Carabao Cup by Championship side Derby County on Tuesday.

One of the major talking points before today’s game was Sanchez being surprisingly left out of the squad altogether, not even making the bench despite being pictured in the week travelling to London and not being injured.

Martial was selected instead and Mourinho has now come out with some pretty confusing mixed messages about his choice afterwards.

The Portuguese suggested he bowed to pressure from fans and/or media by choosing the Frenchman, whom he admitted it not as good as he’d ideally like on the defensive side of his game.

‘I want to play [Anthony] Martial,’ Mourinho is quoted in the Manchester Evening News. ‘Something that you are asking for a long, long, long time to play Martial, I left Alexis [Sanchez] out, and I think that Martial is not a player very, very, very focused on his defensive duties.’

Don’t know about you, but to us this almost sounds like a manager deliberately choosing a player he thinks is inferior just to make some kind of point. Classic Mourinho.