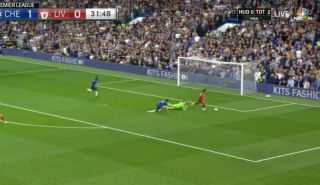 The Egypt international was played through brilliantly by Roberto Firmino, rounded the goalkeeper, but his touch was too heavy, allowing Antonio Rudiger to get back and clear his effort off the line.

The goals have not been coming as thick and fast as they were last year for Salah, whose dip in form looks a big concern for Liverpool as they look to come from behind to win today.

With so much talk of LFC being serious title contenders this season, that really relies on Salah not continuing to miss big chances like this and fail to dominate games as he did in his first season at Anfield.