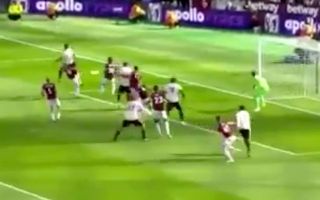 Man Utd toiled for much of the opening 70 minutes against West Ham United on Saturday, but Marcus Rashford eventually provided a bit of quality for the visitors.

Not long after coming off the bench, the 20-year-old showed great improvisation and awareness after breaking free at the near post to flick the ball past Lukasz Fabianski and into the back of the net from a corner.

Just as it seemed as though that could give the visitors the boost they needed to go and get something from the game, Marko Arnautovic had other ideas as he scored just minutes later to restore his side’s two-goal advantage.

In truth, given the overall performance from Man Utd, it’s difficult to argue that they deserved anything from the game as they failed to create opportunities and didn’t impress in the build-up of their play.

Nevertheless, Rashford certainly deserves praise for this fine effort, but unfortunately for him and United, they couldn’t then build on it and spark a comeback against the Hammers.