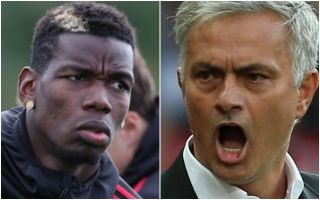 Former Man Utd defender Rio Ferdinand believes that Paul Pogba is potentially speaking up for others in the squad when publicly criticising tactics last week.

As noted by the Metro, the French international spoke publicly about his desire to see United attack more, especially at Old Trafford in front of their own fans.

Naturally, that was interpreted as a criticism of Jose Mourinho’s tactics and more reserved approach, while the pair were seen having a tense stand-off in training on Wednesday as their relationship certainly seems to be on thin ice.

Pogba was in the starting line-up against West Ham United on Saturday afternoon, and so that would suggest that things aren’t bad enough for Mourinho to leave him out of his side.

Nevertheless, Ferdinand is concerned that the issue might be deeper as he feels as though Pogba may well be the ‘mouthpiece’ for a group of United players who aren’t happy with the situation under the current boss.

Results have been poor recently for the Red Devils, and whether or not Pogba is the one that is having to face the brunt of Mourinho’s wrath for his teammates or not, they have to put that to the side and focus on getting results otherwise big changes may have to be made sooner rather than later.

“We usually see managers relieved of their duties for this.”

“The manager needs to dictate and lead from the top!” @rioferdy5 thinks Paul Pogba is being a mouthpiece for the Man Utd squad… ? pic.twitter.com/rX6Pgi6RJ6