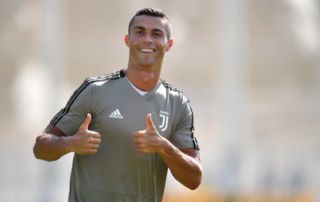 Juventus star Cristiano Ronaldo was on Instagram live on Friday night, and he shared some thoughts on FIFA’s ‘The Best’ awards won by Luka Modric and Mohamed Salah.

The Portuguese superstar ended up empty-handed as his former Real Madrid teammate took home the main prize of the night while Salah’s strike against Everton last year earned him the Goal of the Year award.

SEE MORE: How Juventus could line up vs Napoli: No risks from Allegri as title rivals clash

It comes despite Ronaldo guiding Real Madrid to another Champions League triumph, while he scored a sensational overhead kick goal against current club Juventus in the competition last season which arguably was a better effort than that of Salah.

Nevertheless, Gareth Bale also has an argument to make given he produced a similarly outstanding bit of quality, and it came in a Champions League final no less.

However, while he did show respect and congratulated the pair on their awards, the 33-year-old couldn’t help but slip in a little dig over being snubbed for both as he was more than happy to remind us all of his achievements and level of play throughout his career and his goal in Turin last year.

“I congratulate him [Modric], sometimes it’s like that, you win and lose. I’m happy with what I’m doing, I’m at the same level for the last 15 years,” he said, as quoted by Calciomercato.

“His [Salah] is definitely a well deserved award, it was a nice goal, but my overhead kick against Juventus in the Champions League was better. That’s okay though, I already have that prize at home.”

Clearly missing out on the prizes hasn’t dampened his confidence or self-belief, and so time will tell if his exploits in his first season with Juventus can help Ronaldo reclaim some of these prizes that he’s missed out on this time round.

In fairness though, few would surely argue with Modric winning his award given the midfield maestro’s influence for club and country over the last 12 months from winning major honours to guiding Croatia to their first ever World Cup final.