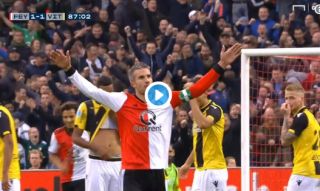 Robin van Persie scored an absolute stunner to win the game for Feyenoord today, getting some Manchester United fans nostalgic for him to return to Old Trafford.

The Red Devils aren’t in great form right now as the likes of Alexis Sanchez and Romelu Lukaku look far from at their best.

Van Persie’s incredible free-kick shows he’s still got it with that hammer of a left foot of his, that served him well in a successful Premier League career with both Arsenal and Manchester United.

Take a look at a video of it below, plus some reaction from United fans who’d still take him over Lukaku!

I’d still take RvP now over Lukaku. Not even a hard decision that. https://t.co/Noa3V60r5r

An aged RvP is genuinely better than Lukaku https://t.co/lC9HsG7PW2

All the clear cut chances Lukaku has missed this season just flashed in my head while watching this beauty from RVP. ???????? https://t.co/4JsqTnGYyG

RVP is still a better striker than ours.

Watched goals from Zlatan, Rooney and RVP in their respective games today and right now that's just about the only Man Utd connection that is cheering me up.

Man I miss rvp so much

Reminds me of the late winner over City ..RVP still got it in him https://t.co/WJIW1DrLQN

His departure, especially given the short time he was at the club, still bothers me. We haven't had a striker like him since. Rooney, RVP and Ibrahimovic streets ahead of anything we currently have. https://t.co/q9EWb0FZob