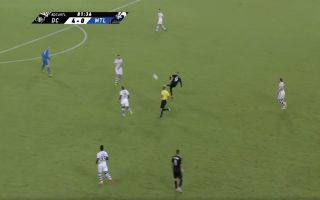 In fact, the veteran striker managed to grab a brace for his American employers on Sunday, during a 5-0 win against Montreal Impact at the Audi Field.

Rooney’s first goal saw him skip by the last defender effortlessly to fire home, but his second was even better as he controlled a poor kick out from the Montreal goalkeeper to lob the ball into an empty net from 40 yards out.

The strike was typical of a man well known for his superb technique and penchant for the spectacular, but it also managed to further emphasise the fact that he is still taking his football very seriously despite approaching the latter stages of his career.

Check out the brilliant goal below, courtesy of the official MLS Twitter account, along with some fans reaction from Man United fans pleased to see their former star still producing the goods!

There’s absolutely no stopping @WayneRooney right now. Already made the MLS a league of his own. He’s taken the worst team in the league to a playoff spot. Game changer. #DCUpic.twitter.com/H2JF0ls5Yu

Happy to see Rooney scoring goals in the MLS.