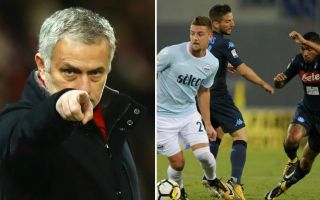 Reportedly courted by some of the biggest clubs in the Premier League including Man Utd and Liverpool, Lazio have announced Sergej Milinkovic-Savic has signed a new contract.

As noted by The Mirror, the Serbian international was said to have been scouted by Man City, Liverpool and Tottenham at the weekend, while the report adds that he was heavily linked with a switch to Man Utd this past summer.

However, as seen in the tweet below from Lazio, along with teammate Ciro Immobile, the pair have signed new contracts which will keep them with the Biancocelesti until 2023, in what is a major boost for the club given the influence and importance that the duo have in Simone Inzaghi’s line-up.

As per Calciomercato in August, it had been suggested that Lazio club president Claudio Lotito was demanding at least €130m for his prized asset.

With the new contract in place though, not only would that suggest that Milinkovic-Savic is happy to stay at the Stadio Olimpico, but also that it will be increasingly difficult to now prise him away as Lazio have certainly safeguarded their position.

The 23-year-old has continued to earn a reputation for being one of the most talented young players in Italy, albeit he has endured a slow start to the new campaign with just one goal and one assist in six Serie A outings.

Nevertheless, he has shown for club and country that he can be an influential figure in midfield, and so it’s no surprise that clubs the size of United, Liverpool and Man City were said to be interested in taking him to England.

It remains to be seen if that happens in the future, but with this new contract, he is surely suggesting that he’s happy where he is and that Lazio are now in a strong position to demand a hefty transfer fee if exit talk begins to build again.