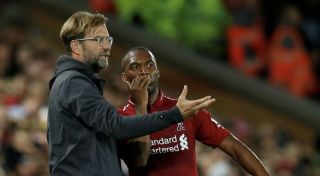 Liverpool manager Jurgen Klopp hopes that Daniel Sturridge can build on his recent displays to eventually become a fixture in the starting XI.

The English centre-forward fired home an unstoppable equaliser late on for the Reds against Chelsea on Saturday which ultimately earned the team a 1-1 draw at Stamford Bridge.

The 29-year-old came off the bench with just four minutes to play but his moment of magic ensured that Liverpool maintained their unbeaten start to the season.

SEE ALSO: ‘Bordering on the miraculous’ – Chelsea star singled out for huge praise after Liverpool game
Van Dijk reassures Liverpool talisman Salah after a frustrating start to the season
BBC team of the week: Chelsea star bizarrely snubbed as Liverpool duo make it in, West Ham stars picked after win over Man United

Sturridge has endured a difficult last few years at Anfield amid fitness issues and a lack of form in front of goal, however, it appears that he is getting back to his best at the start of the 2018-19 campaign, despite still being on the fringes of Klopp’s starting line-up.

The boss on @DanielSturridge after scoring his fourth goal of the season. ?https://t.co/zu4RBsqQVH

According to the Mirror, the German boss insists that the next step for the striker is to play 90 minutes regularly, as he told reporters on Monday: “That’s the target. Daniel played fantastically against PSG.

“That role, exactly that. High intensity for 60 or 70 minutes and probably could have played longer, but we had Bobby (Firmino to come on) then.

“It must always be the target of a player to play with the highest intensity over 95 minutes. I don’t know (if he can do it) because we haven’t tried it yet. He 100% understands the need to do that.

“He doesn’t want us to change our style for him. He plays exactly how we want him. He loves the position. He is that kind of nine-and-a-half, coming back into position, he can be a 10 and play between the lines and play the pass like he was when he scored the goal.”

Sturridge could be in line to feature in Liverpool’s next game on Wednesday, in the Champions League against Napoli in Italy.

The Reds will be looking to build on their matchday one victory against Paris Saint Germain and the England international certainly looks primed and ready to deliver the goods in the final third once again if called upon.